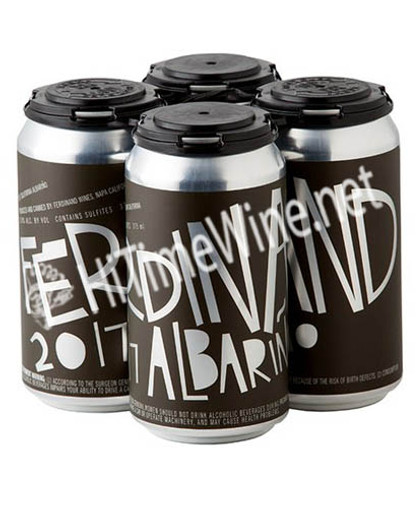 Winemaker Evan Frazier started the Ferdinand label in 2010 with just 56 cases of Albarino. Introduced to winemaking in 2006 by Abe Schoener of the Scholium Project, that year Evan worked his first harvest, in the Roussillon (Maury, France), with ancient Carignan and Grenache vines. Ferdinand is made in the Kongsgaard cellar on Atlas Peak (Napa, CA) where Evan is the General Manager for Kongsgaard Wines and has worked with John Kongsgaard since 2008.

Markus Bokisch decided to plant his own vineyards east of Lodi after beginning his career carefully farming some of the best vines in Napa. Probably the foremost authority on Spanish varieties in California, his family is from Spain and he looked to those roots when he planted Albariño, Tempranillo, Garnacha Blanca, Verdelho, and Graciano. The Vista Luna site is uniquely situated far to the northeast of Lodi in the rolling benchland at the edge of the Sierra foothills. It is known for its cobbled, rocky soil and the cooling breezes which blow from the Delta to the Sierras. Other wineries working with fruit from Vista Luna include Turley, Neyers, Scholium Project, Forlorn Hope, and Mark Herold Wines.

Gently whole cluster pressed and barrelled down to neutral barrels, the wine ferments spontaneously with native yeasts and no temperature manipulation. Malolactic is arrested with S02 to preserve freshness and the wine spends 8 months on primary lees with no stirring. Light gold color, this wine is balanced and attractively fragrant, with a savory and floral aspect that includes orange peel and lime zest, lemongrass, quince and grapefruit aromas and flavors. Lees aging in neutral oak gives the wine finesse, sophistication, and a hint of nuttiness a pleasing complement to the varieties balance of natural acidity, slight bitterness, and salty finish.